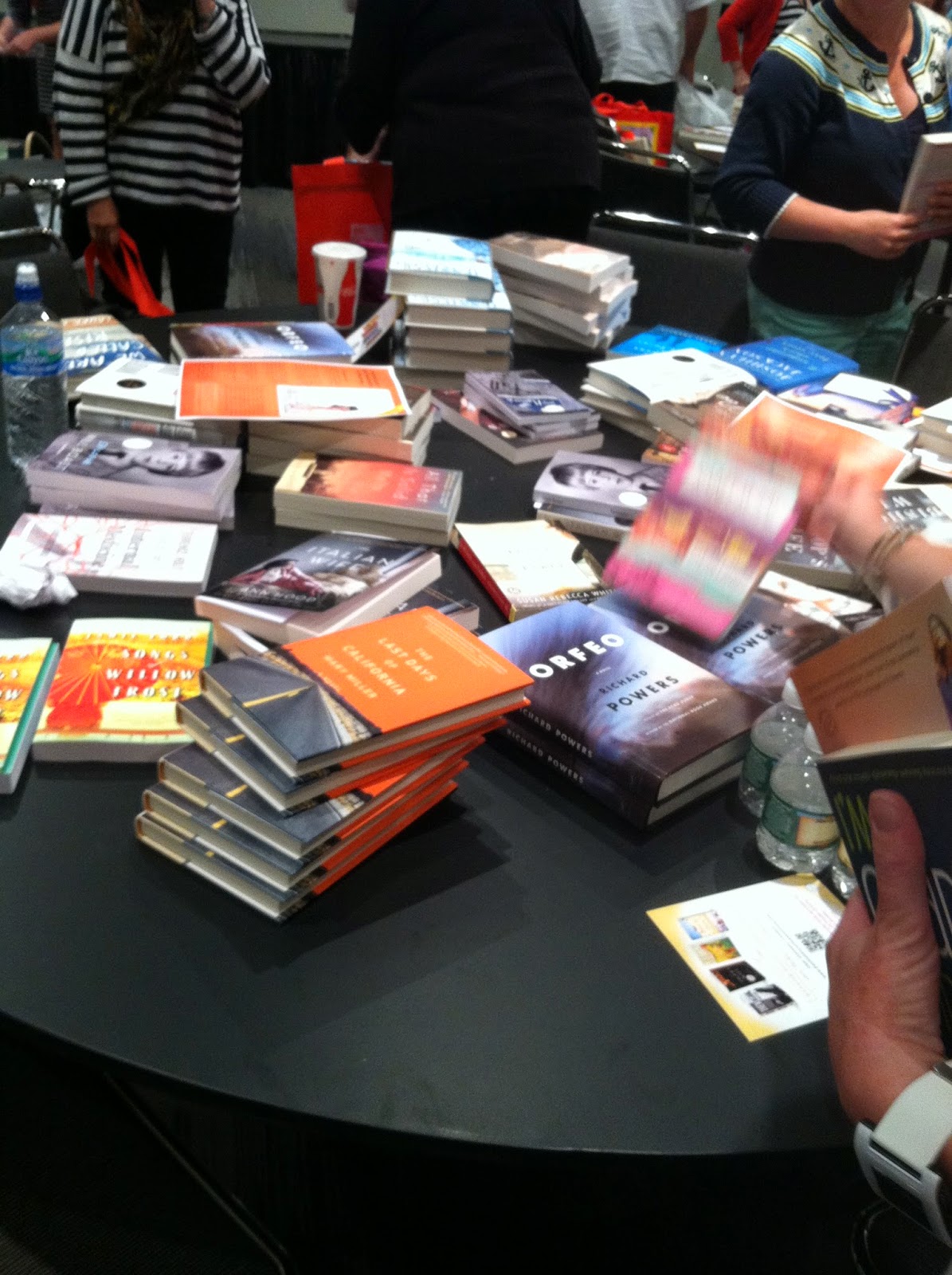 We gathered in the hallway waiting for the doors to open. Women from New York City, San Francisco, Nashville, D.C. - women from across the country who love books. Book sellers, bloggers, librarians, book club representatives, all people who treasure a newly bound book fresh from the publishing house.

At approximately 1:50 PM, the doors opened and I walked in feeling like a little kid in a candy store. Where to start first? Which book to pick up? Tables were piled high with novels and memoirs published this year, better than an Almond Joy, more delicious than Godiva. I found my assigned table, #4, and took my seat. My hands wanted to grab those shiny new covers, but I was polite. I’d wait for the publicists from Simon&Schuster, Hachette, Penguin, etc to give their pitch and then decide which stories I want for my bookshelves, plus I thought I’d give my tablemates a chance to make their choices. But, to be honest, I did slip two in my bag – two books I just had to have. And I noticed others doing the same. It’s not easy to restrain yourself when free books are laid out in front of you for the taking. When I was younger I might have dug my hand into a bowl of Maryjanes (I still love the taste of peanut butter wrapped in taffy). Actually I might still do that, but I’ve got more control now when it comes to candy – but not books! 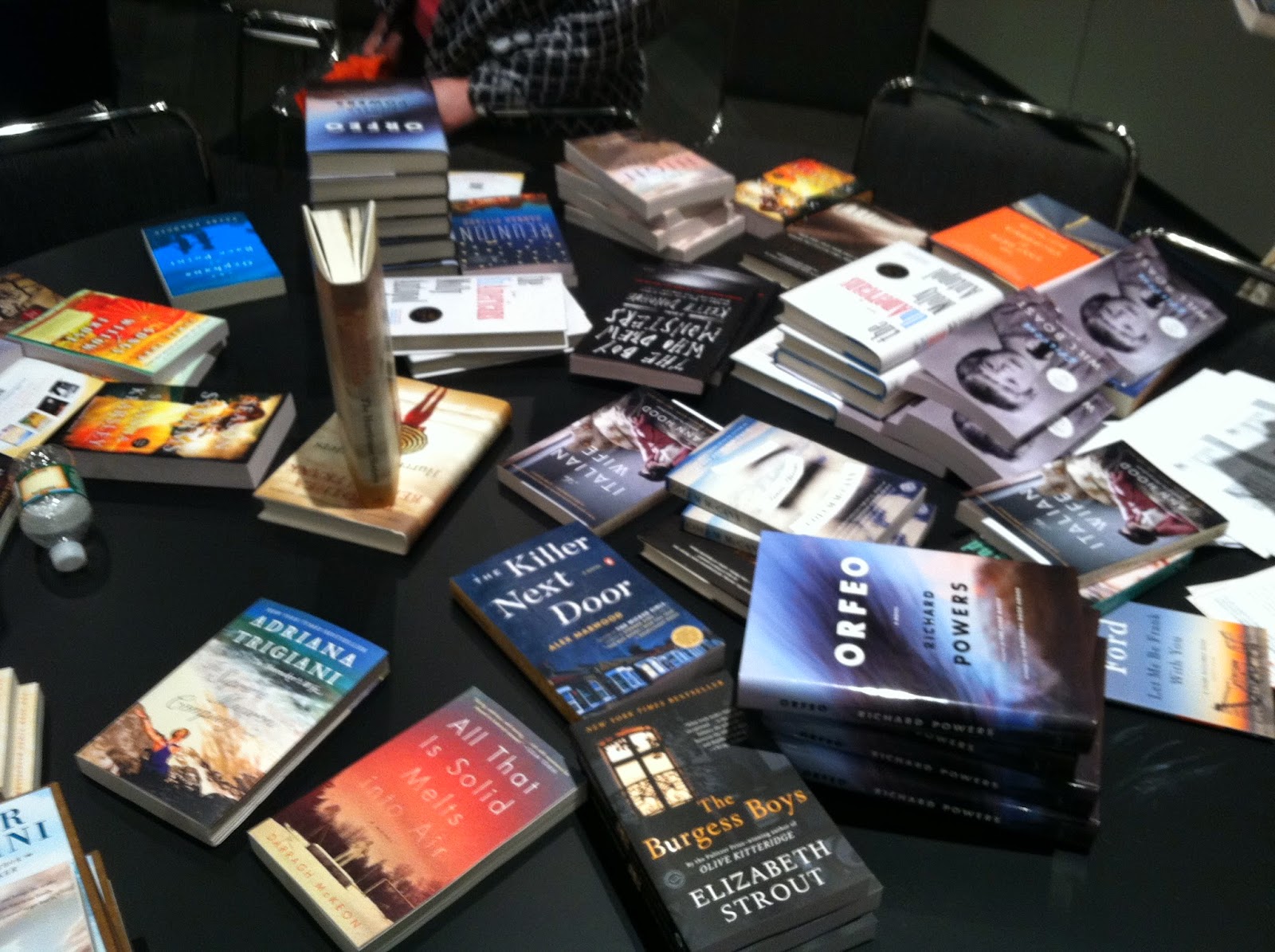 Exactly at 2 PM the moderator, Carole Fitzgerald, president of ReadingGroupGuides.com, kicked off the event. Speed Dating with Publishers, to me, is the most fun, most exciting part of Book Expo America which took place this past week, May 28-31, at the Javits Center in New York City. The event is designed to give booksellers, librarians, bloggers etc. a sneak peek at upcoming titles that will be natural book group picks and as the co-chair of Great Group Reads I get to go (and that makes me very happy).

Great Group Reads is a committee made up of members of The Women’s National Book Association (WNBA – books not basketball). Beginning in March, the committee receives books and ARCs (advanced reader copies) from publishers to consider for National Reading Group Month. Out of approximately 120 books submitted, we choose only 20 for the coveted list which is publicized in September. Chapters of WNBA across the country have events, open to the public, throughout October, National Reading Group Month (NRGM). Go to our website, www.nationalreadinggroupmonth.org to get a sampling of the events.

NRGM is the innovation of sisters Martha Burns and Alice Dillon, WNBA members and the authors of Reading Group Journal: Notes in the Margin (Abbeville Press).The WNBA launched National Reading Group Month in October 2007 as the premier event of its 90th anniversary. Coming up on WNBA’s centennial, watch for more events in NYC and across the country and for membership go to www.wnba-books.org.

Below is a list of some of the titles introduced at Speed Dating with Publishers. Not having read them yet, I can’t comment or review, but all sound wonderful –great reads to take you to new places, meet complicated or quirky characters, and bring you hours of joy.  If you do read them, please come back to the Literary Leotard and leave a comment with your impressions. I’ll do the same in future blog posts.