Soap, Moisturizer or a Luminous Novel?


When you see the words Wash and Wrinkle, don't think of hygiene or the creams we use to ward off the ravages of Father Time. Think books. Margaret Wrinkle's debut novel Wash.

This past Friday night, Oct 27th, the New York City chapter of The Women's National Book Association celebrated the tenth anniversary of National Reading Group Month with an event at Penguin Random House honoring debut authors. After a lively panel discussion, I had the immense pleasure of meeting and chatting with Margaret Wrinkle, one of the four panelists, all whose novels have been Great Group Read's selections. 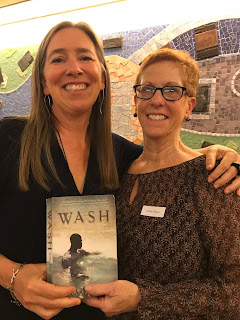 Wash, Wrinkle's lush debut, with some of the most beautiful metaphors I've ever read, moved me from the first page to the last when I closed the book with a deep sigh.  The story takes the reader on a journey from the burgeoning South, with slave breeding, to West Africa and back again where we meet Wash and his mother, Mena, who envelopes the reader in the beauty of her African spirituality while she infuses her son with his history and people. Pallas and Richardson, along with all of Wrinkle's other characters, are so vividly portrayed that three weeks after finishing the book I cannot shake them from my mind. Just as Wash's ancestors breathe beside him, Wrinkle's characters continue to walk beside me.

Wrinkle captures the voice of the African slave, as if she had lived among them, as well the distinct voice of the white male slave owner. As a writer, I'm envious of that ability plus of her gorgeous phrases, similes and metaphors. I found myself dog-earring pages so I could go back and re-read the beautiful prose. Plus, I'm intrigued by her use of the craft in giving each character his or her own voice. When I asked why she wrote each one separately in first person, Margaret explained that she had to, that each one spoke to her. And, to make me even more envious of her talent, she steps back from each character and uses an omniscient narrator to bring the reader into the scene, to let us know what else is going on at the same time. When I commented on that technique wondering why she used it, Margaret smiled and said, "I had to know what they were all feeling."

Whether black or white, Wrinkle throws her characters into relationships, some brutal and some loving harboring feelings forbidden by the institution of slavery. Through each of their stories, the novel is a gift both haunting and tender.